The top anti static side of the mat collects static off of equipment and tools laid on top of it at a static dissipative rate, (1 x 106 to 9 x 108 ohms / square).

Electrical outlets typically are the best path to ground the mat in any building because they follow the piping to the Earth’s electrical field underneath the building.

When connected to the electrical outlet, the mat is in electrical balance with the positive and negative charges of the building you are using it in.

Electrical outlets typically are the best ground in any building because they follow the piping to ground underneath the building.

(1) 2′ x 4′ foot 5300 Series .08″ thick rubber anti static mat with two snaps installed on corners of the long side to connect grounding to;

(1) 240 Series wrist strap for capturing static on the skin’s surface that comes with a 6 foot coil cord that terminates in a banana plug (with optional alligator clip) for plugging into 4715 series common point ground;

(1) 4715 series common point ground that has a 15 foot cable with a 1 meg ohm resistor built into it that ends in a #10 Ring Terminal to screw into an electrical outlet.

Note the rounded profile of the 4725 Series Ground prevents tripping over it when it’s attached to the 5700 Series.

The border line between conductive and static dissipative is 1 million ohms per square. This is also referred to as 1 meg ohm or 1 x 106 ohms / square.

Resistance point-to-point (also known as top-to-top or RTT) tests should measure the ESD resistance of the top surface of the mats at greater than or equal to 1 x 106 ohms / square.

As viewable in our diagrams, all 5300 Series mat samples were recorded within the acceptable range between 1 x 106 and 1 x 109 ohms / square, regardless of humidity, to meet the current S4.1 standard.

In our low relative humidity test, the sample with the least resistance measured 1.2 x 107 ohms / square.

In our moderate relative humidity test, the sample with the least resistance measured 1.0 x 107 ohms / square. 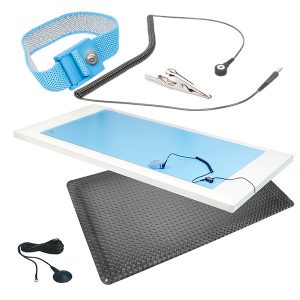 You're viewing: ESD Grounding Methods Kit $314.37
Select options
Do NOT follow this link or you will be banned from the site!