Machine Wash Warm. Do Not Bleach. Use Only Non-Ionic Detergents and Fabric Softeners. Cool Tumble Dry or Hang. Remove Promptly.

The surfactants in department store detergents and fabric softeners usually include anionic (negatively charged) chemicals: alkyl sulfates, alkyl ethoxylate sulfates, and soaps in the ingredient list of your detergent. These can strip the conductive carbon threading of its positive ions leaving it predisposed to carrying negative charges.

You should never use chlorine bleach to wash with these garments. It attacks the carbon bonds (which is useful in removing dyes from white clothes) because bleach will destroy the carbon threading of the garment.

Non-chlorine bleaches are those used in “color-safe” commercial bleaches that are activated by contact with oxygen in the water. These are known as oxidizing bleaches: hydrogen peroxide, sodium percarbonate, and sodium perborate. While not as destructive to the carbon threading as chlorine bleach they are alkalines that can remove carbon with repeated use.

How Do ESD Smocks Work?

8812 Series ESD Smocks shield nearby electronics from static discharges (ESD) emanating from static that is on underlying clothes and skin. The ratio of polyester (the color of the fabric) to carbon (the black thread woven in a grid) in the smock means it is static dissipative: resisting charging when the wearer rubs the smock against itself or other objects. 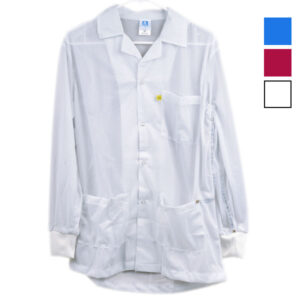 You're viewing: Lightweight ESD Jacket Knit Cuff From: $30.58
Select options
Do NOT follow this link or you will be banned from the site!