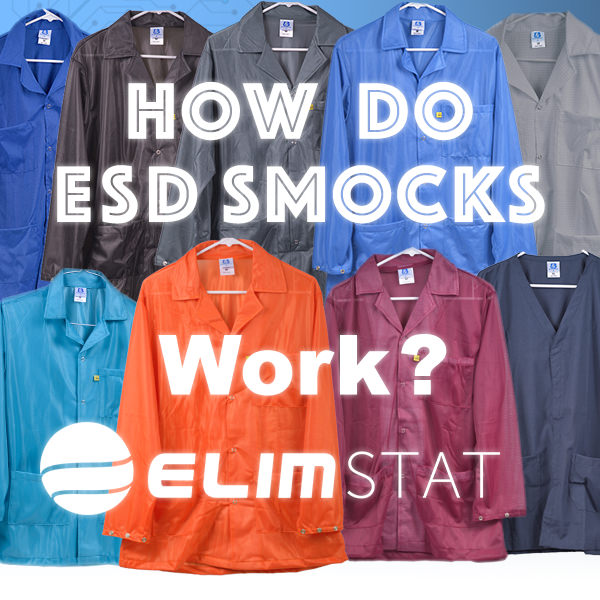 Answer: ESD Safe Smocks present a conductive, static shielding barrier between electrostatic discharges (ESD) emanating from your body and any electronics that you may be near. Made with static dissipative fabric these garments also resist becoming charged with static electricity.

First, let’s look at the “static shielding” properties. Anything that is a conductor potentially serves a “static shielding” function. Conductors shield static because they attract electrons. Once the electron is on the conductor, it can be grounded by the conductor. Grounding is what prevents static from accumulating on surfaces and ESD (electrostatic discharges).

Conductors commonly used for grounding electrons are aluminum and carbon. In ESD Jackets, carbon threading is sewn into a grid across the surface of cotton or polyester in a patchwork. Much like a fence protects a yard, the grid pattern of the black carbon threading prevents static electrons on your body from leaping through the smock as electrostatic discharges (ESD) and zapping nearby electronics.

The standard for the quality of ESD Jackets is set by the ESD Association. These are endorsed by the American Nation Standards Institute (ANSI). Hence, the standard is referred to as ANSI / ESD S20.20. The current version is 2014. (ANSI / ESD S20.20 2014).

If it is genuinely a Groundable Static Control Garment System it should be measured with the wrist strap. Per Section 8.2 of ANSI/ESD S20.20-2007 “Personnel Grounding” Note 2: “For situations where an ESD garment is used as part of the wrist strap grounding path, the total system resistance including the person, garment, and grounding cord shall be less than 3.5 x 107 ohms.”

However, because a static control garment has conductivity built into it there is always the potential danger that the person wearing it can become an isolated floating conductor if they are not grounded.

This is why it is always important to wear ESD clothing in concert with properly grounded mats and wrist straps at workstations.

Secondarily, it is important to wash and dry your ESD garments properly. Over time most every static control garment loses its conductivity due to repeated washing. However, exposure to dryer heat can melt the carbon threading, bleaches can erode the carbon threading, and use of anionic detergents (commonly sold in department stores) can strip away the positive ions on the cotton or polyester fabric of the garment making it predisposed to carrying a negative charge in future use.

Do NOT follow this link or you will be banned from the site!
We use cookies on our website to give you the most relevant experience by remembering your preferences and repeat visits. By clicking “Accept”, you consent to the use of ALL the cookies.
Cookie settingsACCEPT
Manage consent

This website uses cookies to improve your experience while you navigate through the website. Out of these, the cookies that are categorized as necessary are stored on your browser as they are essential for the working of basic functionalities of the website. We also use third-party cookies that help us analyze and understand how you use this website. These cookies will be stored in your browser only with your consent. You also have the option to opt-out of these cookies. But opting out of some of these cookies may affect your browsing experience.
Necessary Always Enabled

Any cookies that may not be particularly necessary for the website to function and is used specifically to collect user personal data via analytics, ads, other embedded contents are termed as non-necessary cookies. It is mandatory to procure user consent prior to running these cookies on your website.