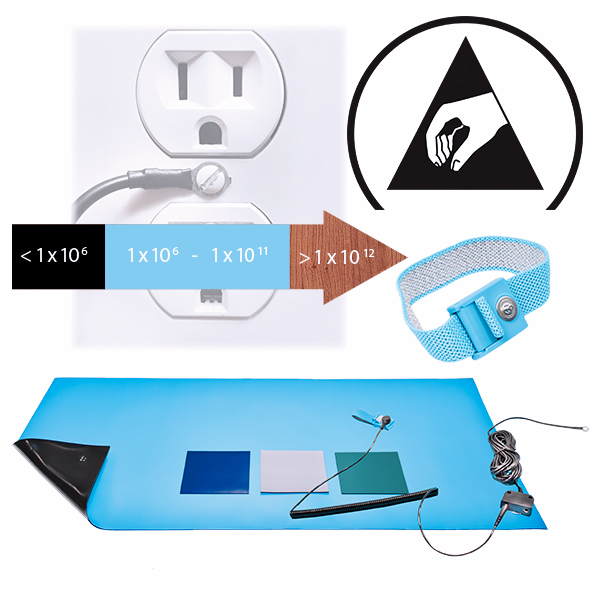 When working on anything electronic you want to make sure you take precautions against static electricity and ESD (electrostatic discharge) from damaging your work. This is accomplished by electrically bonding yourself to ground.

ESD is based on the fact that people and things are made of electrons. When these electrons become static on our skin and clothes they can accumulate charge and when they are near another object a destructive transfer of electrons (electrostatic discharge) potentially can take place.

Electrons become static primarily because of the triboelectric effect: the transfer of electrons that takes place when two objects come into contact with each other.

Insulators like carpets, plastics, and wood are potential sources of static electricity and ESD.

Since insulators can hold multiple positive and negative charges in pockets across their surface there is no safe way to eliminate them other than to keep our distance from them or to cover them if they are part of a flat surface.

However, the ESD Association recommends that an anti static mat has surface resistance its top side between 1 megohm (1 x 10e6 ohms) and 1 gigohm (1 x 10e9 ohms).

This can be measured regularly using a surface resistivity meter.

ARTICLE LINK: How to Use a Meter to Test ESD Mats

While the top side is static dissipative, the bottom side can be conductive. In fact, since most electronics manufacturers use metal shelving and grounded floors they prefer that the bottom side is conductive so that there is no electrical barrier between the grounded (metal) shelving and the mat being used as shelf liner. If the matting is being used as shelf liner laying on top of a wood shelf without connection to an electrical ground it would be considered isolated- (a potential source of ESD).

Whether you are using a metal table or wood table underneath the mat you will want to give static electricity a dedicated path from the mat into an electrical ground when you are using it as a work surface. This is accomplished by connecting a grounding cable to the mat via using metal snaps.

The Grounding Cable is what connects the anti static mat being used as a work surface to the electrical outlet.

The difference between using grounding cables separate for a mat or wrist strap as opposed to a common point ground is primarily ergonomic. However, having the mat and the wrist strap grounded at the same point does keep them in electrical balance.

What you do not want to do is to use the alligator clip to clip the wrist strap to the mat. This will not work. In fact, this will increase the total system resistance to over the 35 megohm limit recommended per ANSI /ESD 20.20 [ESD Handbook Tr20.20-2008 section 5.3.2.2.2]

Unless you have to, it’s recommended not to use the alligator clip. While it seems convenient, it is best used only when you are sure of the pathway to ground you are attaching it to.

Do NOT follow this link or you will be banned from the site!
We use cookies on our website to give you the most relevant experience by remembering your preferences and repeat visits. By clicking “Accept”, you consent to the use of ALL the cookies.
Cookie settingsACCEPT
Manage consent

This website uses cookies to improve your experience while you navigate through the website. Out of these, the cookies that are categorized as necessary are stored on your browser as they are essential for the working of basic functionalities of the website. We also use third-party cookies that help us analyze and understand how you use this website. These cookies will be stored in your browser only with your consent. You also have the option to opt-out of these cookies. But opting out of some of these cookies may affect your browsing experience.
Necessary Always Enabled

Any cookies that may not be particularly necessary for the website to function and is used specifically to collect user personal data via analytics, ads, other embedded contents are termed as non-necessary cookies. It is mandatory to procure user consent prior to running these cookies on your website.