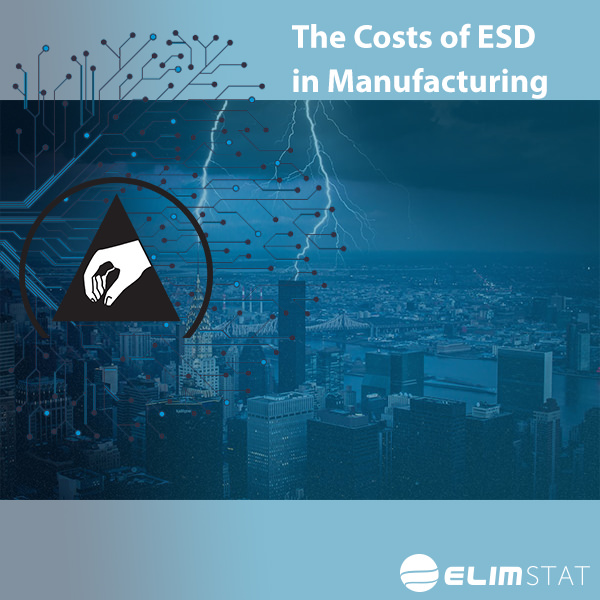 Fundamentally, ESD (electrostatic discharge) is a discharge of static energy that emits heat, light, and sound.

However, in electronics manufacturing, ESD mostly occurs at micro scales invisible to our senses of sight and sound.

This is problematic because we cannot detect it easily. In fact, most ESD damage can only be seen with the aid of a microscope.

Worse, we know from controlled testing[1] that merely having an ESD Program that mandates all personnel to wear wrist straps and ESD safe transport materials can significantly reduce device failures.

In 1983, Western Electric found that implementing an ESD Program reduced up to 75% of the device failures they were experiencing at one of their plants.

In the United States, the standards used in ESD Programs are codified by the American National Standards Institute which has adopted the ESD Association (a global association) standards.

For those interested in developing ESD Awareness at their workplace, the ESD Association does offer training and certification regularly.

ESD is caused by the presence of static on the surface of insulating materials: carpets, glass, plastics, wood, etc.

Insulators can hold positive and negative charges in pockets across their surfaces.

When enough static builds upon the surface of an insulator, it explodes as electrostatic discharge (ESD), which is what damages electronics.

You can test materials for resistance by using metering kits to run voltage through ESD products and then measure their resistance.

The ESD Association codifies these tests. Some of these are discussed in detail here on

So how do you read the results from measuring? You reference the Triboelectric Series. This is how you will know if something is a conductor or static dissipative, meeting a standard, and develop your control limits.

So how do you deal with insulators?

Grounding is creating pathways for electrons to travel around the insulators into the ground.

Grounding involves using a mat and a wrist strap to conduct static to ground.

This involves ing grounding cables to the mat so that it is plugged into electrical sockets with ground connections.

It also involves connecting your body to the ground. This involves wearing appropriate grounding apparel like wrist straps and heel grounders.

Ionizing air molecules with fans or blowguns enables you to blow air molecules that contain positive and negative charge over insulative surfaces so that charge decays rapidly off them.

ESD Air ionizers are either operated on alternating current or direct current blowing patterns through emitter points located in front of the fans blowing the air.

Depending upon the geometry of your static problem ionizers can be effective at mitigating charge on assembly lines, in clean room gowning rooms, inside machines, and at soldering workstations.

Ionizers reduce charges that prevent ESD but are also effective at eliminating electrostatic attraction of particles onto sensitive electronics and people entering a clean room.

Alternating Current is preferred to blast charge off surfaces at close range.

Direct Current is preferred when you want consistent waves of and negative charge or to control the timing of that air blowing across the surface.

The costs of preventing ESD can always be evaluated by performing lot tests. If you consider implementing an ESD Program grounding is generally cheaper to start with. However, for static being created inside a machine or by fast-moving assembly lines ionization is almost the only way to ensure charge decay.