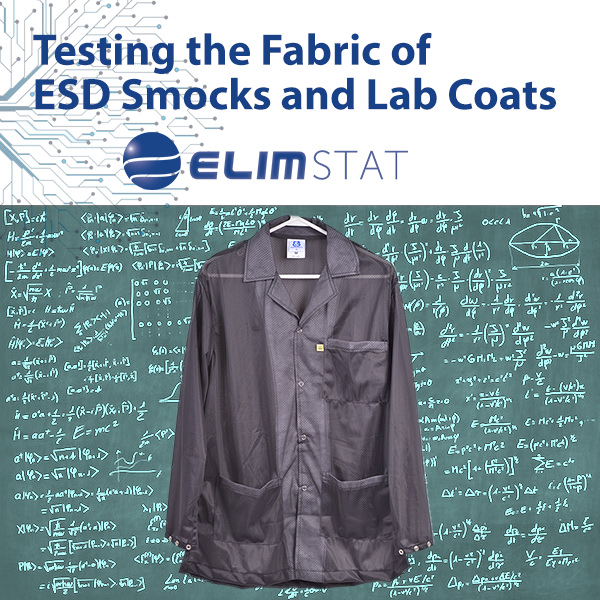 The minimal definition of an ESD smock is that it is static dissipative. This means that measured panel-to-panel it has less than 1 x 1011 ohms of surface resistance.

To perform this test the garment should be electrically isolated, (laying on an insulative surface). Then, place the electrodes connected to the meter on the sleeve panels of the garment.

The meter will measure the lowest resistance path between the electrodes placed on the sleeve panels.

This is sometimes also referred to as a “panel-to-panel conductivity” test. The reason being that it measures resistance through all the panels of the garment: sleeves, torso, etc.

To perform this test, you will replace one of the electrodes that were on one of the sleeve panels with a ground.

A  “Groundable Static Control Garment System” has < 3.5 x 107 ohms surface resistance measured point-to-groundable point with a person wearing it while connected by the wrist strap.

In ANSI / ESD S20-20 2007 this was mentioned in section “8.2 Personnel Grounding” in Note 2 from Table 2: “For situations where an ESD garment is used as part of the wrist strap grounding path, the total system resistance including the person, garment, and grounding cord shall be less than 3.5 x 107 ohms.”

This is significant in that it correlates TR53’s recommendation that wrist straps have a resistance of < 3.5 x 107 ohms.

ESD smocks are precisely “groundable” because they are woven with conductive black carbon threading.

If an ESD Garment is not electrically bonded to mats, wrist straps, or floors that are grounded it becomes a floating lightning rod- an “isolated floating conductor” essentially. The floating conductor issue is acknowledged by the ESD Association in TR20.20-2008 section 5.3.13 ‘Garments’:

“After verifying that the garment has electrical conductivity through all panels, the garment should be electrically bonded to the grounding system of the wearer so as not to act as a floating conductor.”

For more information on ESD Grounding Methods check out our blog section: https://elimstat.com/grounding/

As stated in the document:

“The single most important concept in the field of static control is grounding. Attaching all electrically conductive and dissipative items in the workplace to ground allows built-up electrostatic charges to equalize with ground potential. A grounded conductor cannot hold a static charge.”