Sidekicks are used for blowing particulate matter and static off products, ungrounded conductors, and insulators.

On the Sidekick, a high voltage is applied to a single emitter point that cycles between negative and positive at alternating current’s line frequency (50/60 Hz).

The voltage applied to the emitter point creates an electric field or “corona” around it. This corona of ions then interacts with electrons in nearby air molecules as air is blown through the gun towards the target.

The air molecules coming from the Sidekick’s emitter point attract and push particulate matter off the target, as well as restoring electrical balance to it so that it is not charged positively or negatively.

When ionized air comes into contact with particulate matter it attracts or pushes particles and static off of the object you are trying to protect from electrostatic discharge (ESD) or cross-contamination from electrostatic attraction (ESA).

The first is the discharge of electricity onto a component that zaps it. Known as ESD, electrostatic discharge can alter the functioning of electronic circuits permanently.

The second problem caused by static is that a charged object can attract particulate matter onto it. Known as ESA, electrostatic attraction can cause the charged object to become contaminated and no longer usable.

In fact, ionization is increasingly being used inside clean rooms as more engineers realize that air filtration alone does not ensure the elimination of particulate contamination from subvisible particles (less than 25 microns).

Ionization is needed when you have insulators that hold static, and / or conductors that are not grounded.

Insulators that are well known are wood, rugs, and plastic.

Conductors that are well known are carbon, metals, and humans.

Insulators are charged by triboelectrification or rubbing against other materials where electrons are exchanged resulting in the creation of a charge. Every time you are walking across a surface that is insulative you are building up charge on yourself.

Conductors can be charged by triboelectrification (contact and separation resulting in an exchange of electrons), induction (being in proximity to an electric field), or conduction (direct contact with a charged object.)

When a conductor is not, grounded, it is considered an “isolated charged conductor”. 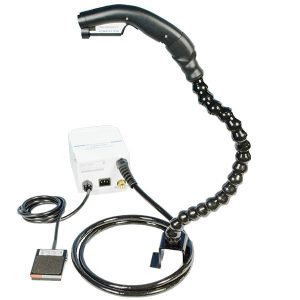 You're viewing: Elimstat Sidekick Blow Off Gun $1,047.00
Add to cart
Do NOT follow this link or you will be banned from the site!